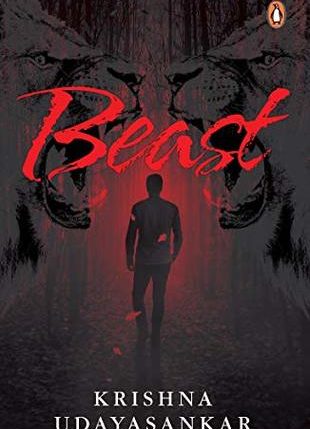 I think I speak for all readers — and reviewers — when I state that the two basic tenets of a good book rests on the author’s ability to create/conjure up a story that will immediately catch their target audience`s attention, as well as the author`s capability to tell that story in the most interesting manner possible, so as to hold the aforementioned target audience`s attention till the last page of the book is turned.

Krishna Udayasankar has managed to tick both boxes most efficiently with her book BEAST  which released in 2019. A neat meld of fantasy and thriller, Beast addresses the animal within us all, and shows us what happens when we let that wild thing go out of control. The inner beast in question here is of the leonine species, werelions, creatures who walk amongst us, noble and savage at the same time.
The plot points are the need for secrecy, the imperative to avert an inter-species war, the requirement to maintain the balance in such a way that Homo sapiens believe they own and run the world.
It is a structured wheel, then a cog comes off and some of the Panthera leos feel it is time to emerge from the shadows, to claim their rightful superiority over the human race.
In a smooth switchback between times ancient and modern, the retelling of the disembowelment of Hiranyakashipu by Narasimha, a drug syndicate, a lethal Prophecy, genome mapping are all part of the mix. There is much action, a smidgen of humour, and of course there is blood and gore, plenty of it. Oh, and there`s some philosophy too: the underlying message of the story is that you can be human or beast but not both, never both.My Wednesday review.

Guest Column: To Mask or Not to Mask, That Is NOT the Question

Book review: The Women who Forgot to Invent Facebook and Other Stories by Nisha Susan