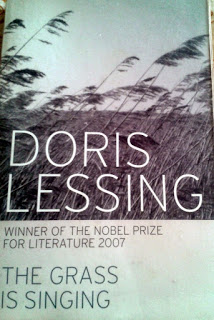 Book review: The Grass is Singing by Doris Lessing

And once in a while, the reader needs to go back to her bookshelf, pick up an old favourite and slowly sink into the world inside those pages. The Grass is Singing by Doris Lessing (Harper Perennial)was my pick for a TBT read.

What a masterly depiction of human frailty. Within a few pages, the reader knows that she is going to bear painful witness to a train crash of devastating proportions. There, of course, is no train but there definitely is going to be a crash.

How can there not be, given the unmoored drifter that Dick Turner, who farms his veldtland in fits of whimsy; given the complex Mary Turner, her head a-churn with so much hope, all dashed against severe disappointment again and again, tearing herself to pieces with her own anger; given the relentless scorching indifference, even cruelty, of the land they live and work on. Lessing paints an accomplished portrait, one riven with sadness, a tale of the blurring of all those lines that are essential to one people lording it over another.

This is South Africa (Zimbabwe, to be precise) in the times of apartheid, where the white man `liked his natives either one way or the other: properly dressed according to their station or in loincloths.` Those who did feel a pang for the black man could not stand out against the society they were joining; soon, `they coarsened to suit the hard, arid, sun-drenched country they had come to.`

The white woman swung between extreme fear and revulsion at the native. Then, there is the black man himself, an enigma but a seething enigma. Sometimes, that seething pot boils over.

The title is from T S Eliot`s famous poem The Wasteland. The book was published in 1950. Sixty-five years ago. Apartheid, thankfully, no longer exists. But the cruelties that men and women visit on each other? That continues, for human nature is what it is.

Book review: Maps for a Mortal Moon by Adil Jussawalla

Book review: The Mountain: My Time on Everest by Ed Viesturs and David Roberts